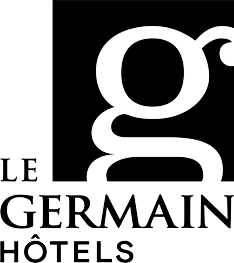 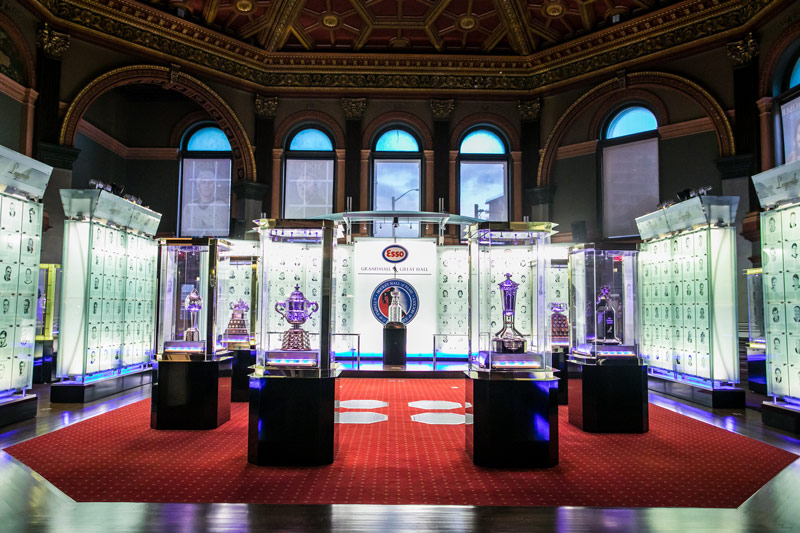 The highlight of any visit to the Hockey Hall of Fame is the Esso Great Hall, the cathedral to the icons of hockey. Inside, double glass walls hold portraits and biographical sketches of each Honoured Member. On the north wall, plaques listing the Elmer Ferguson Memorial Award and Foster Hewitt Memorial Award winners, selected by the Professional Hockey Writers' and NHL Broadcasters' Association respectively, are displayed.

Originally built in 1885, this historic building also serves as home to the greatest collection of silverware in the world of sports, featuring all major NHL trophies, including the most famous and coveted of them all, the Stanley Cup.

You can also get high-quality prints of you and your family together with the Stanley Cup during your visit to the Hockey Hall of Fame, and even download digital copies afterwards. See details for Stanley Cup Personal Photo-Op presented by FujiFilm. 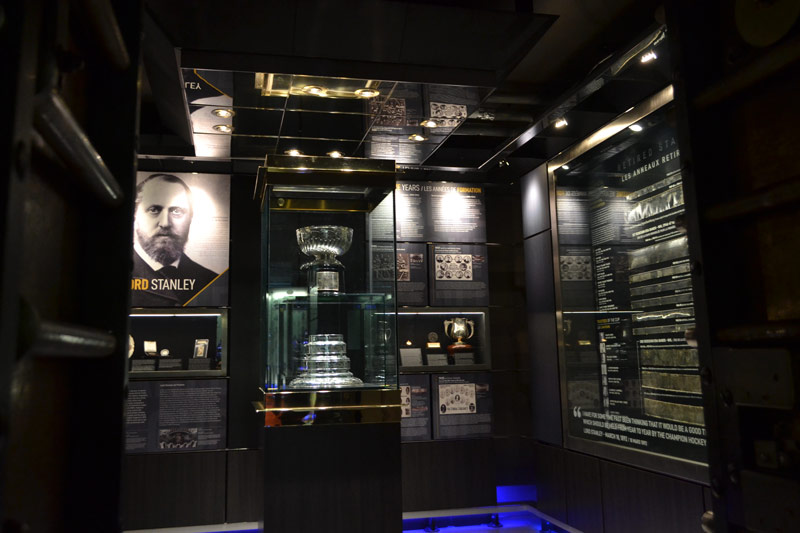 Located within the Esso Great Hall, this specially refurbished bank vault houses the original Stanley Cup donated by Lord Stanley of Preston. This trophy, considered hockey’s greatest historic chalice, was first presented in 1893 and retired in 1962. Also exhibited within Lord Stanley's Vault is an extensive collection on Stanley Cup championship rings, removed and retired Stanley Cup bands, a timeline on the different shapes the Cup has taken, and historic artifacts that tell the story of this one-of-kind treasure.

The limited-time “9&99: Howe • Gretzky Exhibition” – a tribute to the legacy and indelible bond of the most prolific scorers of our generations witnessed through the greatest compilation of milestone artifacts and rare personal memorabilia, all hand-picked by Hockey Hall of Fame curators from the Howe and Gretzky family collections – is currently featured within the Honda NHL Zone, alongside the area’s four regular sections: ‘Legends of Hockey’, ‘NHL Today’, ‘NHL Retro’, and ‘NHL Milestones’.

The zone also features the PHATS/SPHEM Wall of Honour, listing the members of the Professional Hockey Athletic Trainers Society (PHATS) and the Society of Professional Hockey Equipment Managers (SPHEM) who have been honoured by their peers for their outstanding contribution and service. 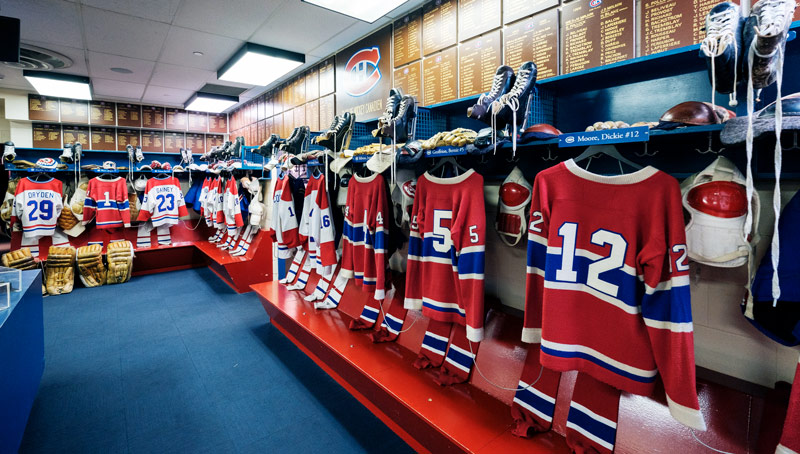 The Montreal Canadiens Dressing Room exhibit is a to-scale replica of the renowned space within the Montreal Forum which was home to 23 Stanley Cup champions between 1924 and its closing in 1996. Player stalls commemorating some of the greatest Habs, including Lafleur, Plante, Beliveau, Dryden and Morenz, encircle the area.

This faithful recreation allows guests to handle equipment from various eras and experience what was once considered the most inspirational room in hockey. 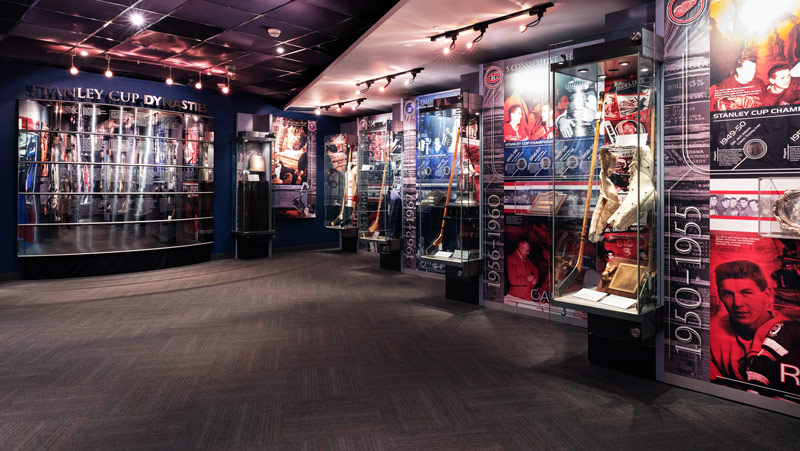 Stanley Cup Dynasties includes reverent displays to the rosters of nine franchises which lorded over the NHL for extended periods of time, giving these clubs the singular honour of being considered “Dynasties” – featuring the Ottawa Senators of the 1920s, the Toronto Maple Leafs of the 1940s and 60s, the Detroit Red Wings of the early 50s, the Montreal Canadiens of the late 50s, the 60s and the 70s, the New York Islanders of the early 1980s, and the Edmonton's Oilers of the late 1980s. 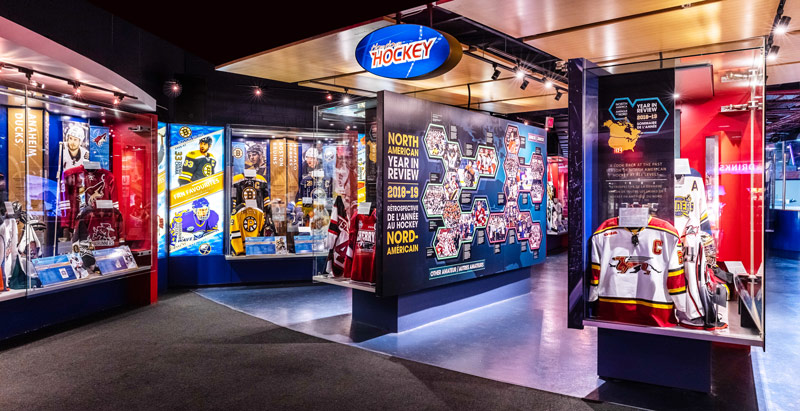 Hometown Hockey is a salute to North American hockey locales, spotlighting the various levels of hockey from grass roots to professional, both current and defunct, as well as extensive coverage on women's and disabled hockey.

The expansive area also features "Franchise Alley", which consists of a series of showcases highlighting each NHL franchise including their minor league affiliations.

At the epicentre of the zone exists the Hometown Hockey theatrical multimedia exhibit where visitors can call up virtually any North American city and explore the town's noted players, trophies and championships.

Also housed in the Hometown Hockey zone is the "Changing Face of Hockey - Diversity in Our Game" display. The permanent showcase brings to light the challenges faced by marginalized people across North America in their struggle for social equality and acceptance in the great game of hockey. Highlighted within the display are four significant issues that helped shape today's game - Ethnicity in Hockey, Marginalized People in Top Level Pro Hockey, Women in Hockey and Disabled Hockey. Discover the stories of the Colored Hockey League, the Indigenous and Black hockey players from the past and present, the pioneers and evolution of women's hockey, making hockey accessible and more. 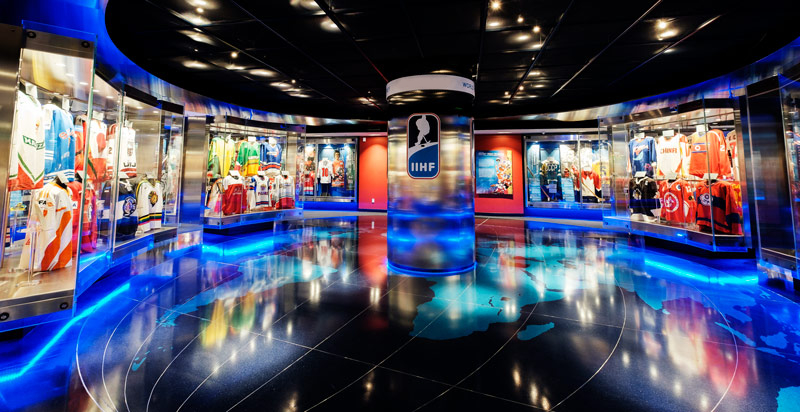 The Tissot World of Hockey Zone is the largest dedicated exhibit area within the Hockey Hall of Fame, providing an unparalleled tribute to international hockey through an unrivalled collection of artifacts and media from all 74 IIHF member countries.

The zone celebrates international hockey’s greatest moments, tournaments, leagues and players, including the IIHF Hockey Hall of Fame Honour Roll and interactive Global Game Flight Deck, an immersive multimedia experience that provides visual travel to the past and to arenas across the world. 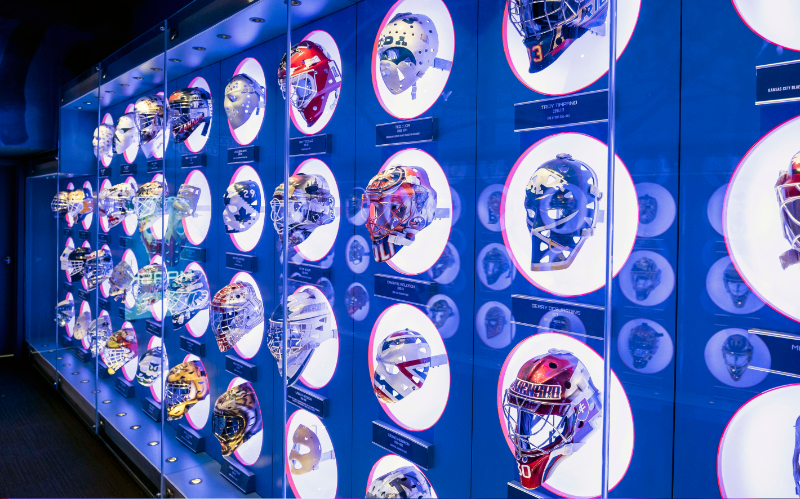 With 90 iconic goalie masks on display, The Mask presented by Imports Dragon is an unparalleled tribute to puck stoppers past and present and offers a historical retrospect into the evolution of facial protection from safety to self-expression. 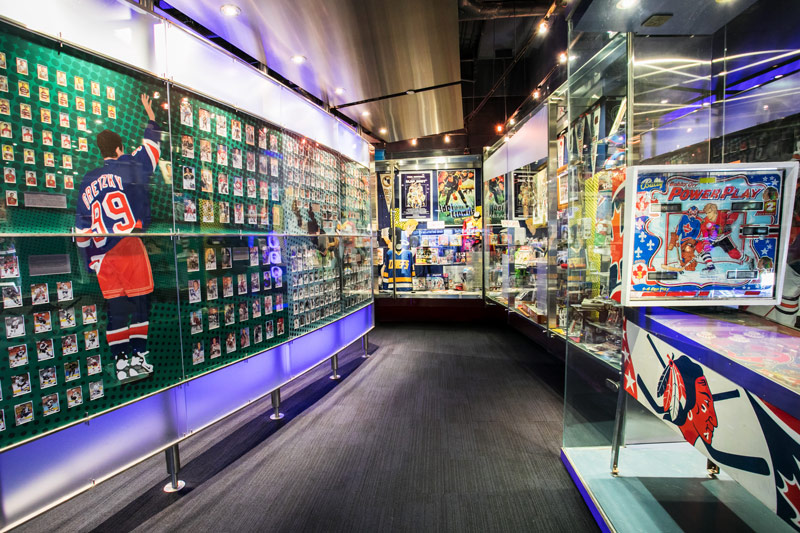 There is an incurable addiction tied to hockey. No one can explain exactly why it occurs or how widespread this addiction can be. The addiction, of course, is collecting hockey memorabilia, and the Hockey Hall of Fame pays tribute to the passion of collecting with an exhibit called Upper Deck Collectors' Corner.

From cards to table-top hockey games, this exhibit displays how hockey has intersected with popular culture and technology throughout the years.