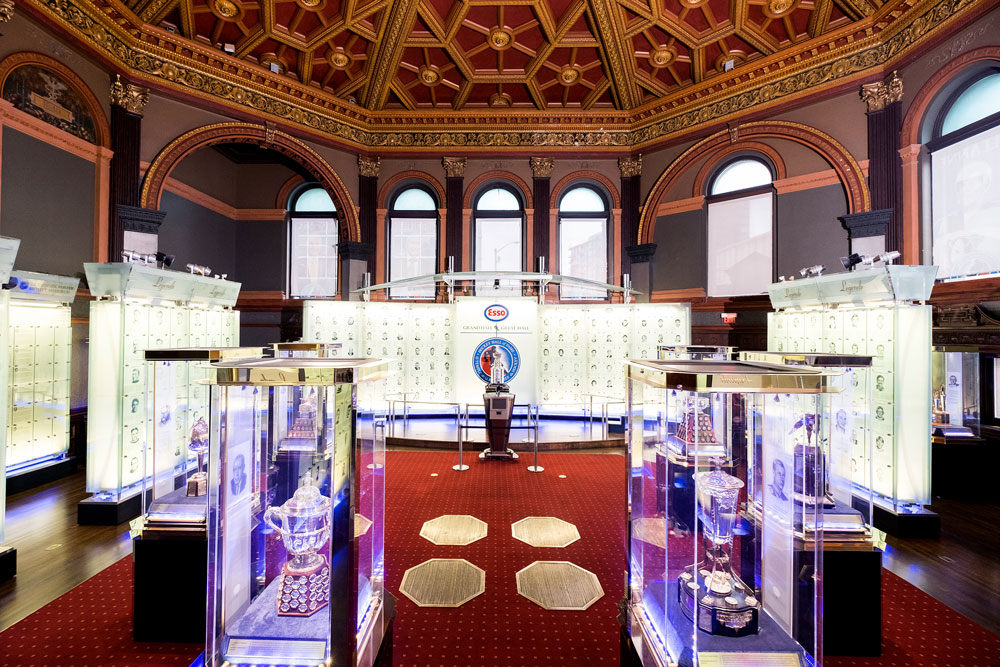 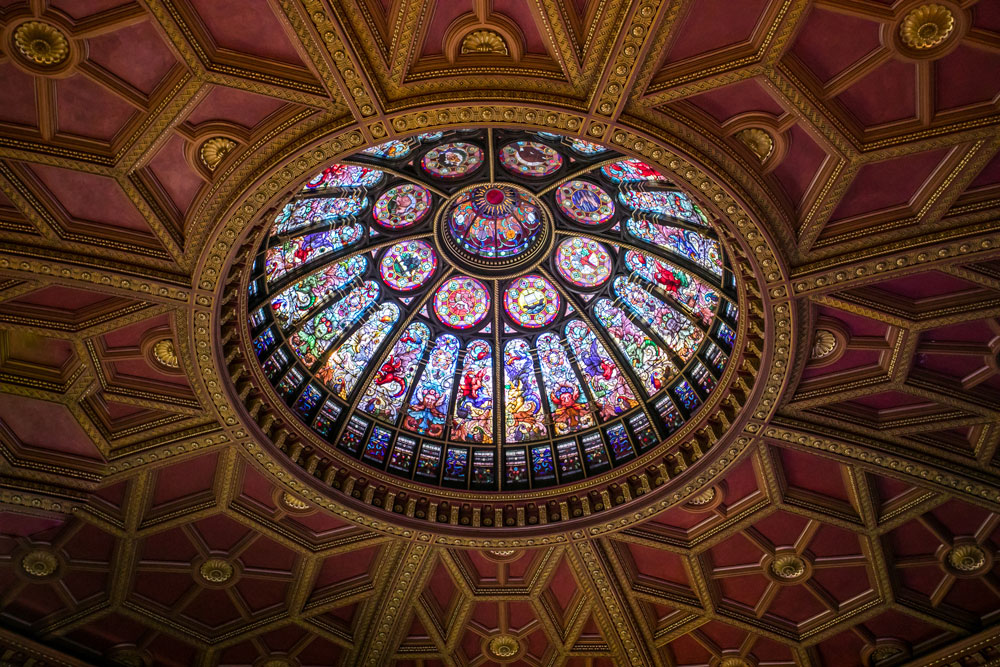 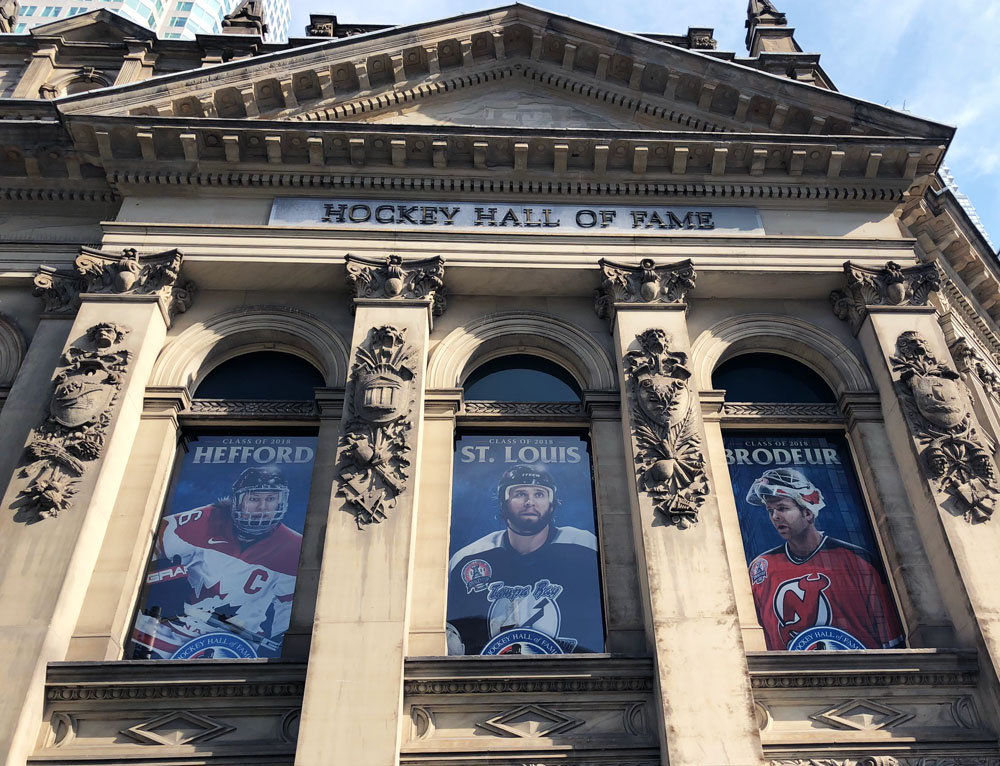 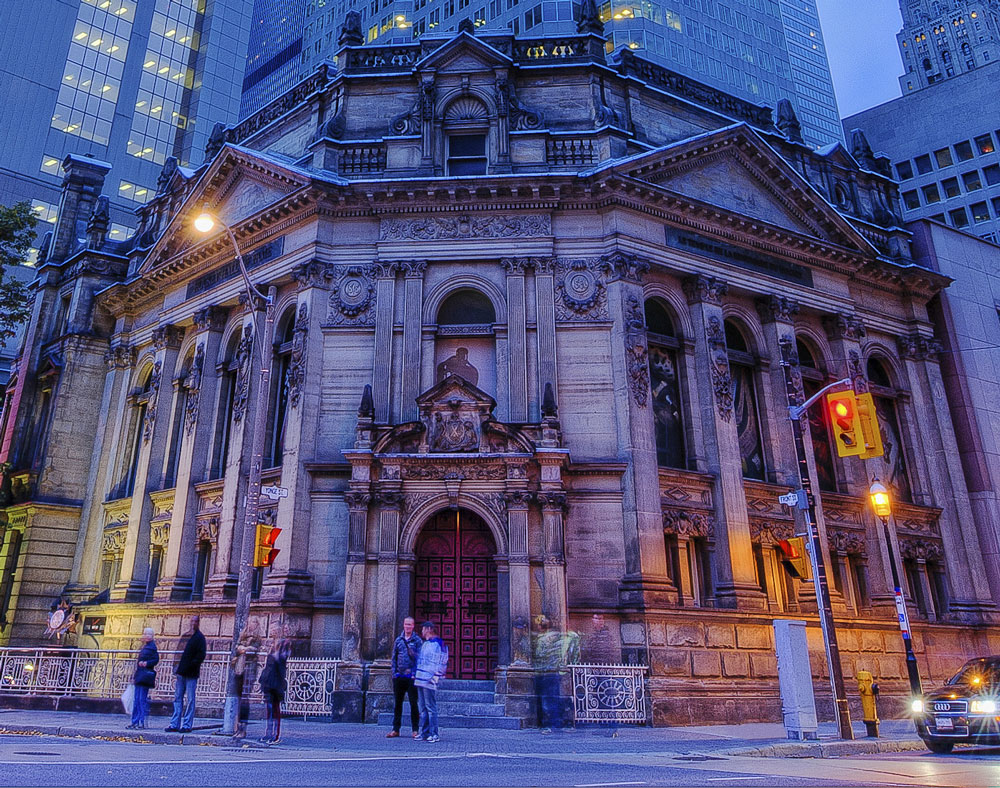 Built within 10 years of the birth of hockey, the building that houses the Esso Great Hall is a quiet place in which to reflect on the richness of our past. Construction of the building began in 1885, during a period of great prosperity and optimism in Canada's future. Originally a bank, the building reflected the importance of banking in the formation of a country in much the same way that it now reflects the importance of hockey in the building of a culture.

This florid example of rococo architecture was designed by the Toronto firm of Darling and Curry, which also created the similarly august Toronto Club a few blocks away. Used by the Bank of Montreal as a head office until 1949, the building continued to serve as a branch until 1982, when it closed for the last time.

The building remained largely unused until its restoration by BCE Place (now Brookfield Place) for use as the Hockey Hall of Fame (except for the rumoured presence of Dorothy, the ghost of a former teller who took her own life after a failed love affair with the bank manager).

Entering the Esso Great Hall, you find yourself in a room that was once the largest bank branch in Canada. Measuring 70 by 70 feet, the room rises to a 45-foot-high stained glass dome. Rendered in the best traditions of classical symbolism, the dome is the largest of its kind in Toronto. Constructed by Joseph McCausland and Sons, it features 24 fanned panels that depict allegorical dragons guarding gold from eagles. Around the outside are a cornucopia of fruit and flowers. In the centre, eight circles bear emblems representing what were then the seven provinces and Canada. The task of restoring the stained glass to its original glory was given to Andrew McCausland, the great-great-grandson of builder Joseph McCausland, whose son Robert was responsible for the original design.

Richly modeled detail abounds in the Hall, framing the mezzanine on the west side. This was the former boardroom, behind which was the bank manager's private apartment. Many of the interior carvings are by the Toronto firm of Holbrook and Mollington, based on architect Frank Darling's drawings.

The square plan of the interior is translated by diagonal corner arches into an octagon on the outside. The huge arched windows of plate glass, extravagant for their time, signal the size of the interior. To the left of the south portico stands the massive stone figure of Hermes, who has carried the weight of the building's chimney on his shoulders for more than 100 years. Four tall piers support a pediment on each of the two main facades, which carry on the pantheon theme begun in the bank's main Montreal office. Near the top of these piers, the lavish architectural detail continues with carved masks and sculpted shields.

Below each of these masks are carved elements that symbolize the arts and industry. On the east side, a telegraph pole represents communication and the railways, while a tableau represents industry, literature and painting. On the south portico, coins and ledgers represent banking, a lute and clarinet stand for music, columns and tools for architecture and sheaves of wheat for agriculture. The most striking of the city's 19th-century bank buildings stands today as one of its most beautiful restorations. It confirms a commitment to architectural preservation on the part of the City of Toronto, and Brookfield Place.

The Hockey Hall of Fame acknowledges the land we are on is the traditional territory of many nations including the Mississaugas of the Credit, the Anishnabeg, the Chippewa, the Haudenosaunee and the Wendat peoples and is now home to many diverse First Nations, Inuit and Métis peoples.