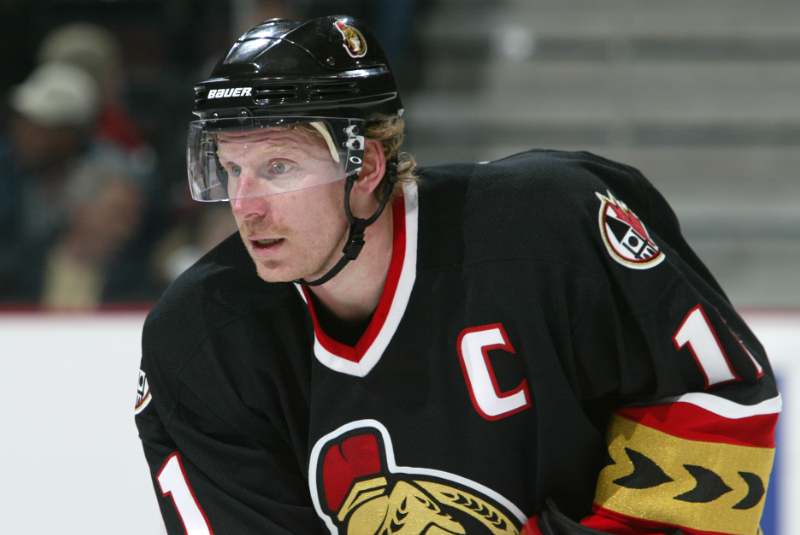 Daniel Alfredsson was named captain of the Ottawa Senators in 1999. (Dave Sandford/HHOF) 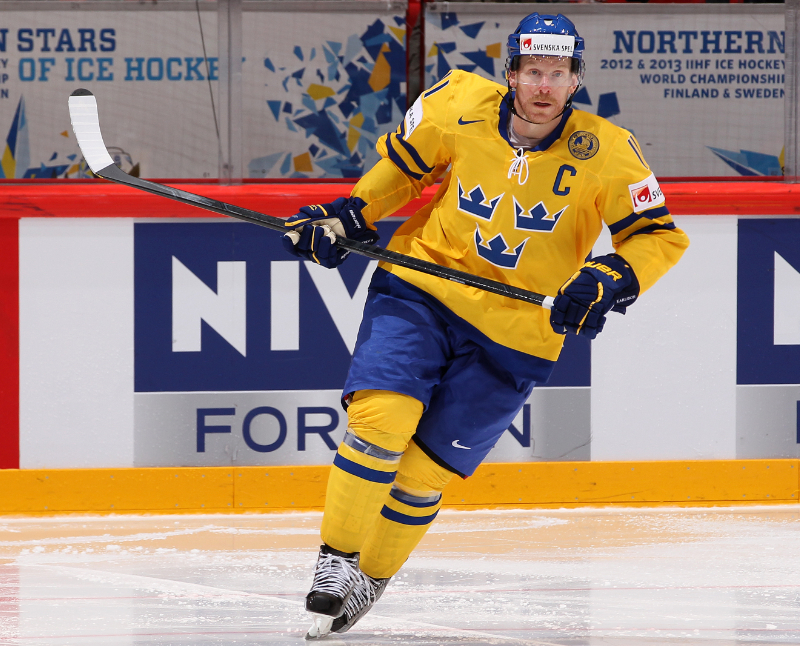 Alfredsson represented Sweden at many international tournaments over his career. (Andre Ringuette/HHOF-IIHF Images)

Through the first decade of this century, when you thought of the Ottawa Senators, the first image you likely had was that of the franchise’s longtime captain, Daniel Alfredsson, arguably the most important player in this version of the Senators.

Born December 11, 1972 in Gothenburg, Sweden, Daniel Alfredsson was drafted by the Senators in the sixth round, the 133rd selection of the 1994 NHL Entry Draft. Despite being a late pick with few expectations of him, Daniel proved to be a delightful surprise for Ottawa, leading the team in goals (26) and points (61) in 1995-96. He was the Senators’ representative at the NHL All-Star Game and at the end of the season, won the Calder Memorial Trophy as the NHL’s best rookie.

Daniel Alfredsson was named captain of the Ottawa Senators in 1999. (Dave Sandford/HHOF)

The Ottawa Senators joined the NHL in this reincarnation in 1992-93, and in large part due to Alfredsson’s production and inspired play, made the playoffs for the first time in 1996-97. Again that season, he represented the Senators at the NHL All-Star Game as he did the following two seasons.

Daniel was appointed captain of the Ottawa Senators prior to the 1999-2000 season and held that role through 2012-13. As of July 2009, he became the longest-serving active captain in the NHL.

Alfredsson represented Sweden at many international tournaments over his career. (Andre Ringuette/HHOF-IIHF Images)

The shootout was introduced to NHL teams for the 2005-06 season and on October 5, 2005, Alfredsson made NHL history by scoring the league’s first shootout goal, beating Ed Belfour of the Toronto Maple Leafs.

Alfredsson led the Senators through the playoffs during the spring of 2007, becoming the first European captain to lead his team to a Stanley Cup Final. Ottawa eliminated the Pittsburgh Penguins, New Jersey Devils and Buffalo Sabres to go to the Final against the Anaheim Ducks. Although ultimately unsuccessful, Daniel scored 14 goals and 22 points in 20 games.

After 17 seasons with the Ottawa Senators, Alfredsson surprised the hockey world by signing with the Detroit Red Wings as a free agent on July 5, 2013. During his career in Ottawa, he set franchise records by playing 1,178 regular season games, scoring 426 goals and adding 682 assists for 1,108 points. He was the recipient of the King Clancy Memorial Trophy in 2012, and the Mark Messier Leadership Award the following year.

It was strange to see Daniel Alfredsson in Detroit red and white, a move he made with the hope of winning a Stanley Cup championship. He said, “I had not won a Stanley Cup and that’s a big priority for me.”

The 41-year-old Alfredsson contributed 18 goals and 49 points during the 2013-14 season, but had been hampered by back problems which ended his playing career. He announced his retirement on November 27, 2014. A week later, he signed a one-day contract with the Ottawa Senators so he could officially retire as a member of the team with which he began his NHL career. On December 29, 2016, Daniel Alfredsson’s number 11 was hung to the rafters before a game against the Red Wings, retired by the Senators’ franchise, the first modern-day Senator to earn such designation.

A prodigious worker at both ends of the rink and a leader, whether in the NHL or for Sweden, Daniel Alfredsson’s highly successful career led to his induction into the Hockey Hall of Fame in the Player category in 2022.